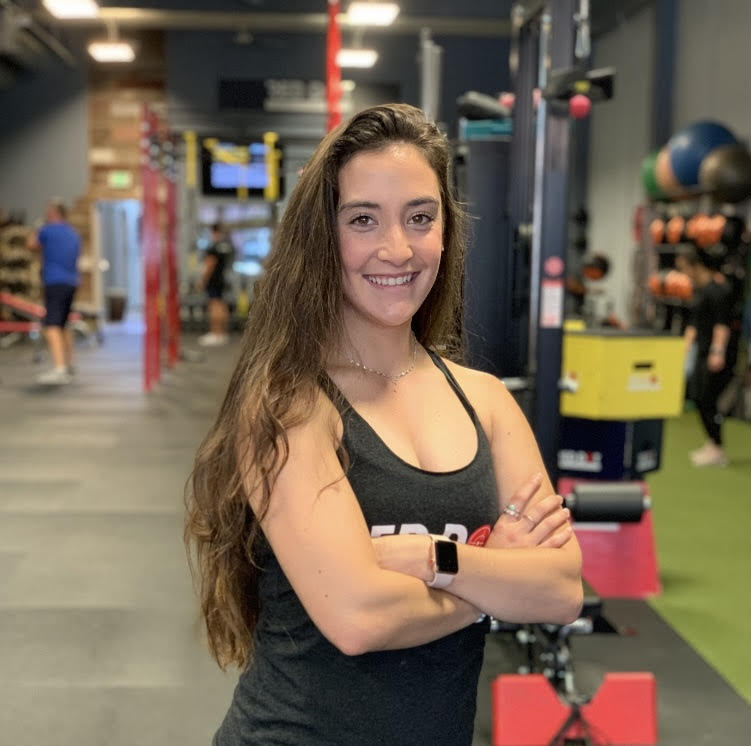 Red Dot Fitness (RDF) isn’t new to Kayla, she’s worked behind the scenes on the RDF website with the team of marketing and website developers who have worked with RDF since 2011. However, having Kayla in the studio is something new, and she's excited to share her work experience and skill sets as the Administrative Assistant. Kayla comes to RDF with strong leadership skills, impeccable organization, focus, attention to detail, and a fierce drive and intensity as she manages projects and tasks.

It’s not surprising to know that Kayla’s attributes toward work have most likely been with her since childhood as she has excelled at most everything to which she has set her mind. From an early age, Kayla’s been passionate about fitness. At four years old, she started playing recreational soccer and this evolved over time. Kayla continued with soccer throughout high school; however, midway through she was introduced to an up and coming sport, Olympic Weightlifting. She leveraged both CrossFit and Olympic Weightlifting to improve her strength and endurance on and off the soccer field. Closing out her high school career, Kayla went on to play soccer at West Valley Community College and pursue a major in Sociology. However, during this time she was excelling in the sport of Olympic Weightlifting. She soon decided to stop playing soccer, focus on Olympic Lifting, and make some changes in her academic studies. In her final year at West Valley, she was given an offer to join Menlo College’s Olympic Weightlifting team as a student athlete. She closed out her college career with a Bachelor of Science in Business, with multiple national competitions under her belt and one that placed her on the podium.

In Kayla's free time, it would be shocking not to see Kayla in the gym. She lives by a very close knit schedule; she drives 25+ miles to RDF and another 40+ minutes north for her Olympic Lifting workouts. Outside of her work and sport life, she enjoys spending it with family and friends or watching her favorite tv series, Criminal Minds. Kayla thrives in competition, and has worked and lived by a lifestyle of "it's all or nothing." In her eyes, you're either in at 110% effort, or you get kicked to the curb. Kayla's dedication and work ethic is unparalleled to most at her age, and she is constantly reasssuring others to live the same.